In spite of all the great accomplishments of the empire, it's the Aztec sacrifice that the people are often remembered for.  Why were sacrifices offered?  What were they like?  Read on...

Though the human sacrifice is the most talked about, there were actually many types of sacrifices in the empire.  The people believed that they owed a blood-debt to the gods.   They wanted to avert disaster by paying the endless debt.  Blood was a common theme - the sacrifice that the gods required (see Aztec religion for more on Aztec sacrifice).

So, animals would be sacrificed, as well as humans.  Also, there was ritual blood-letting, where people would cut themselves to offer their blood to the gods. 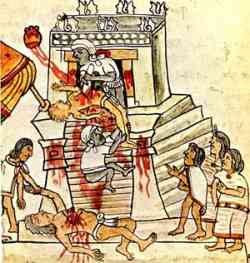 A picture taken from the Codex Mendoza,
created by native scribes for the Spanish in 1541-1542,
showing a ritual Aztec sacrifice.

Human sacrifice was practised to some extent by many peoples in Mesoamerica (and for that matter, around the world) for many centuries.  But it was the Aztec empire that really took the ritual to new heights.  How many people were sacrificed by the Aztecs?  We don't know how many were sacrificed over the years - it's possible that some accounts are exaggerated - but it was probably thousands each year - tens of thousands or more all together.  Some estimates claim 20,000 a year.

The Aztecs had 18 months in one cycle, and for each of the 18 months there was ritual sacrifice.  The victim would be painted as a part of the ritual, they would be placed on a slab where their heart would be removed and held up to the sun.  The body would be thrown down the stairs of the temple/pyramid.

The body would be disposed of in various ways, such as feeding animals at the zoo or putting on display (the heads).  There are some accounts of cannibalism, but it's uncertain if this was practised to any great extent.

There were other ways that humans would be sacrificed - shot with arrows, drowned, burned, or otherwise mutilated.  Killing in a fight (like the Roman gladiators) also took place.

Both the empire's own people, and their enemies were sacrificed.  The warriors were often involved in a special ritual war called a xochiyaoyotl (or flower war/flowery war).  The object was not to gain territory or kill the enemy, but to capture them as food for the gods.  Both sides of the battle were required to fight, and they usually were willing participants.  The people would be captured instead of killed, and then sacrificed.

Of course, as we mentioned there was great religious significance to the Aztec sacrifice.  What its purposes were beyond that are debated.

There's no doubt that it would have struck fear in the hearts of the natives that were not in the empire, and perhaps terrified the people in the empire as well.  Surely the consolidation and power, not to mention wealth, was in mind as the leaders continued to promote the practice.  But in the end, the incredible loss of human life would weaken an otherwise powerful nation.