The artist carved the Aztec calendar stone in 1479.  Naturally, it was dedicated to the sun god.  It was a massive carving, 3 feet thick, almost 12 feet across, and weighing almost 25 tones (22.5 tonnes).  It was carved from basalt - a solidified lava, this being an area where volcanos were common.  But then it was lost - buried under the central square of

Then, in 1790, renovations began on the central square (Zocalo) of Mexico City.  On December 17th, the massive carving was unearthed, renewing interest in Mexico's ancient cultures.  It was the Aztec calendar stone, or, more properly, the Cuauhxicalli Eagle Bowl.

For a while it remained on display in the Western Tower of the Metropolitan Cathedral, and then in 1885 it was moved to the Museo Nacional de Antropología in Mexico, where it remains to this day.

The famous calendar stone is a brilliant combination of artistry and geometry.  It reflects the Aztec understanding of time and space as wheels within wheels.  The detailed surface of the stone combines the understanding of the gods the people had created over the centuries as well as their observations of the heavens.

The first calendar of the Aztec people was called the xiuhpohualli, the counting of years.  This was a 365 day year, of course very helpful for planning your farming and predicting the weather.  There were 18 months, each 20 days long, or 4 (5 day) weeks.  Then to bring the year up to 365 days there were 5 "unlucky" days added.  Each year would also be divided into 4 seasons.

With the addition of a 12 day New Fire ritual every 52 years (which we'll talk about in a moment), the exact length of the years were remarkably close to the actual length of the solar year that modern scientists calculate.

Though both calendars inter-relate in religion and ceremony, it's the tonalpohualli that is considered the sacred calendar.  The rituals were all divided up among the gods.  After all, we have to be fair, or the gods will get all out of balance.

Find out today's date, or your birthday according to the Aztec calendar stone on this site!

More on the background and origins of the Aztec calendar.

The end of the century

Every 52 years, the two calendars would align. This could bring disaster on the world, so a special ritual took place called the New Fire Festival. Check out the Aztec religion article for more about what took place during the festival and why.

Creation, at least the most recent creation, took place in the date known as 13-reed (this may be sometime around 1011AD). Every 52 years, the current creation was in danger of being destroyed.

Read more about how the Aztec calendar wheels work! 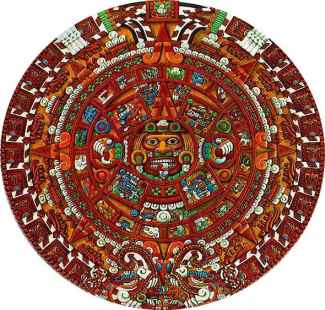 A coloured representation of the Aztec calendar stone, or sun stone

The Aztec calendar stone itself

We are unsure of how the stone itself was used, but it may have been simply a monument or possibly a sacrificial altar. In the centre is the terrible sun god, Tonatuih (some believe this may be the earth god). Each of his hands holds a human heart, and his tongue is a ritual blade for sacrifice. As you may know, the sun required blood to remain strong, and human sacrifices were often offered.  (read more about the Aztec sun god)

The four squares that come next show the four previous creations that perished (by jaguars, wind, rain and water). Next come the 20 signs mentioned above, the days of the Aztec month. The 5 dots are the 5 unlucky days, days of sacrifice.

The next area has square sections with dots, possibly representing weeks of 5 days each. The eight angles are rays of the sun.

Finally, on the Aztec calendar stone there are the snakes that come head to head. The symbols may represent the 52 years in a cycle. Between the tails is a symbol probably showing the date the stone was carved. At the edge are 8 equally spaced holes. Sticks may have been placed in these, in order to use the calendar as a sundial.