Of course, even the term Aztec is a bit misleading. It's a name that is used for a group of peoples in Central Mexico, but really there wasn't any one people group that was "Aztec". The Mexica people were at the heart of the empire, but there were many other cultures that formed the civilization that the Spanish were to discover. 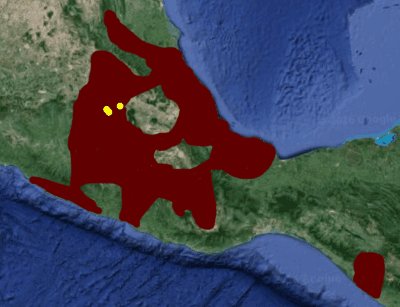 What kind of an empire?

If we use the term empire, we need to know what we mean by it. There were many empires throughout history, and they ruled people in very different ways.

It might be helpful to go back and see exactly how the civilization started...

Many years after the Mexica people first built their proud city, Tenochtitlan (later to become Mexico City), they formed an alliance with two other cities - Texcoco (Tetzcoco) and Tlacopan (these three cities are shown as yellow dots in the map above). This Triple Alliance was to rule the Valley of Mexico until the Spanish arrived. However, over time one city become the most powerful - Tenochtitlan. It would become the heart of the Aztec civilization.

Essentially, the history of the empire is a history of city-states. As the empire expanded (which it began to do in earnest around 1428) it conquered more cities. Some cities resisted. Others were conquered and began to pay tribute.

How the empire was ruled

The city of Tenochtitlan was the military power, which spearheaded the conquest of new territory. But the Aztec emperor didn't rule every city state directly. Local governments would remain in place, but would be forced to pay varying amounts of tribute to the Triple Alliance (with most of the tribute going to Tenochtitlan).

For this reason scholar Alexander J. Motyl would call this empire a informal or hegemonic empire.

You also need to remember that the Aztecs didn't necessarily rule connected territories. Because they were conquering cities, they sometimes had power in "pockets" over an area.

But don't think that this was a weak empire. Ruling through a local government ensured that the locals would keep the people happy, and that there would be stability and continuity. This system worked very well for the peoples of the empire.

The empire might have continued to grow had not the Europeans arrived in 1519. At this time it was at its height, reaching from the Pacific to the Gulf of Mexico, from Central Mexico all the way to Guatemala, El Salvador and Honduras. See this map of the Aztec empire for a visual idea. Here's another conception: 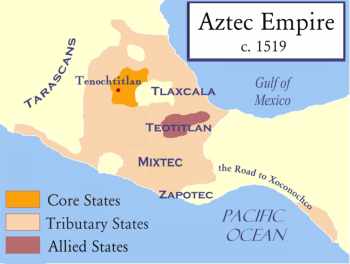 More about the Aztec civilization here.