How did the world begin?  The Aztec creation story has its own answer - or you could say, answers, to that question.  The five suns were the key to the rebirths of the world.

The story of creation in ancient Mexico and surrounding areas actually changed as time went by.  It was likely adapted by the Aztecs for their own political purposes, though even within the Aztec empire there were variations of the story.  But basic components of the story had evolved over centuries and centuries, so we do see similarities between the Aztec's stories and the beliefs of earlier cultures.

The story of creation, according to the Aztecs, is actually a story of birth, death, and rebirth.  When the world is destroyed, it's born again through the sacrifice of one of the gods, and so through the birth of a new sun.  So you'll often hear of the legend of the five suns - the five births of the world.  Five suns, and so five different worlds, have existed.  When the story is told, the order of the worlds is sometimes different, sometimes there are even less that five suns, but the general idea remains the same.

But it's not a story of endless cycles, as you may see in other cultures.  For the Aztecs, the universe did have an actual beginning...

In the beginning was the void.  It was at some ancient time in the Aztec creation story that the dual god, Ometecuhtli/Omecihuatl, created itself.  (Looking back, of course, the Aztecs believed that the many opposites that they saw in the world would have to somehow unite in the origin of the world.)  This god was good and bad, chaos and order, male and female.  Being male and female, it was able to have children.  It had four, which came to represent the four directions of north, south, east and west.  The gods were Huizilopochtli (south), Quetzalcoatl (east), Tezcatlipoca (west), and Xipe Totec (north).

The directions were very important to the Aztecs, since their great empire was believed to be at the very centre of the universe (remember what I mentioned about the Aztec creation story being political?).

These four gods began to create.  They created water, and other gods, and the sea monster Cipactli.  Cipactli was part fish and part crocodile, a massive creature as big as all things that now are.  This was a consuming monster, a jaw at every joint.  Cipactli was to become the source of the cosmos in a strange way.

As the gods continued to create, they had a problem - their creations would fall into the water and be eaten by the dreadful Cipactli.  So it was time for war - the four gods attacked the sea monster, pulling her in four directions.  She fought back, biting Tezcatlipoca and tearing off his foot.  But at last Cipactli was destroyed.

From this enormous creature the universe was created (in some traditions this happened between the last two suns).  All the 13 heavens stretch into her head.  The earth was created in the middle, and her tail reaches down to the underworld (Mictlán) (nine underworlds, to be exact).

Here's another perspective on the Aztec creation beliefs.

To complete the world, the great source of energy had to be created - the sun.  This is the key to the cycles in the Aztec creation story.  But the sun is so powerful, it can't just be created.  It can only come into being through the sacrifice of a god.  The god chosen was Tezcatlipoca.

Tezcatlipoca only managed to become half a sun, however, making this first creation incomplete.  During the first age, the gods created giants from ashes, and gave them acorns to eat.

A fight began, however, between Quetzalcoatl and Tezcatlipoca.  In the end, the sun was knocked from the sky, and in anger Tezcatlipoca sent jaguars to destroy the giants.

At this point Quetzalcoatl took over for his brother as the sun.  Humans were created as they are now (normal size).  They lived on piñon nuts, and for a while things were fine.  But the people became corrupt, and perhaps out of revenge Tezcatlipoca turned them into monkeys.  Furious, Quetzalcoatl sent a hurricane to blow the monkeys away.

Tlaloc was one of the early creations of the gods, the god of rain and water.  He became the next sun.  But his personal problems became his downfall.  Once again, Tezcatlipoca was the instigator.  Tezcatlipoca stole Tlaloc's wife (Xochiquetzal), and Tlaloc was grief-stricken.  He shone as the sun but refused to send rain, in spite of the pleas of the people.  Drought swept the earth, and finally in a rage Tlaloc made it rain fire, burning away this version of the world.  (Another version attributes the destruction of this world directly to the continuing battle between Tezcatlipoca and Quetzalcoatl).

The Aztec creation story continues...  This time the gods selected Tlaloc's sister to be the sun.  She was Calchiuhtlicue.  But filled with jealousy, Tezcatlipoca and Quetzalcoatl struck down the sun.  As she fell, the sky opened up and water flooded the earth.  All things were destroyed again.

In the darkness between the suns, Quetzalcoatl descended into the underworld to bring up the bones of the dead.  They would be used to bring to life the people who are now here.  (That's a whole other story!) 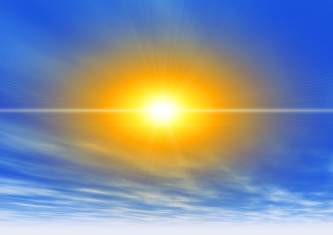 The gods gathered to bring another sun into being.  This is when the Aztec creation story really gets around to explaining what the world is today.

The proud god Tecuciztecatl offered himself, but the other gods preferred the humble Nanahuatzin.  A great fire was built, but Tecuciztecatl was too afraid at the last minute to jump in.  Nanahuatzin did jump.  Filled with jealousy, Tecuciztecatl jumped after, followed by a brave eagle and jaguar.

Two suns began to rise in the east.  It was too bright - the gods threw a rabbit into the face of Tecuciztecatl to dim the light, and he became the moon.

But Nanahuatzin was weak.  He was motionless, so the other gods gave their blood to give him the energy to rush across the sky.

This is the world in which we now live.  The Aztecs believed its end would come in massive earthquakes.

Here's something else interesting about the Aztec creation story.  The identity of the final sun isn't actually as simple as it may seem.  Read here for more on the Aztec sun god.


References: The Eagle on the Cactus: Traditional Stories from Mexico adapted by Angel Vigil (2000); Aztec and Mayan Mythology (Yale-New Haven Teachers Institute curriculum) by Diana Doyle (2008); The Corn Woman: Stories and Legends of the Hispanic Southwest by Angel Vigil (1994)