Aztec homes in the big cities in what is now central Mexico ranged from the elaborate homes of the wealthy to the homes of the poor.  Of course, there was the emperor's palace (actually, he had more than one home) which covered an extensive area.  All in all, the homes of families had a lot in common, whether the home of a noble or a commoner.

Common Aztec homes were made of adobe (sun dried brick made from adobe clay).  The main area of the Aztec shelter was one room split up equally into four areas.  There was an area for the whole family to sleep in, a family shrine where gods would be kept, a place where meals would be prepared, and then the eating area.  There would be thatched roofs, or even terraced roofs.  It was here that the people stood to attack the Spaniards, a last stand against the conquering army.

In the adobe walls would be the doors.  It was common for the windows (if there were any) to have two parallel sides and then two sides of different length.  This shape or rectangles were very basic in Aztec architecture.

Aztec nobles had homes with a similar layout, but they would sometimes be made of better materials, such as lime or stone.  These Aztec homes would be bigger and more elaborate.  Generally speaking, nobles were allowed to decorate their homes lavishly, and the commoners very little (learn more about social classes in the Aztec empire).  Gardens were very important to the Aztecs - the nobles might have large beautiful gardens.  Read more about the construction of Aztec houses here.

Aztec doctors believed that everyone should have access to a steam bath - and so every Aztec home in Tenochtitlan (though not throughout the empire) had a separate building for that purpose.  The little circular building had a low doorway (a smaller doorway kept more heat in).  A fire was placed against the wall, and then water was poured on the hot wall creating the steam.  Some would be more elaborate.  The steam bath was called the temazcalli, which means "house to sweat".  Steam baths are still popular in Mexico today (see this photo of a steam bath like the ones in Aztec homes).  They are commonly used for religious purposes.

Once you got to the top of society, you found multi-roomed palaces such as Moctezuma's.  The palace had fabulous botanical gardens and even a zoo. 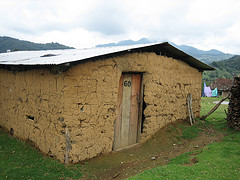 An adobe house in Mexico today